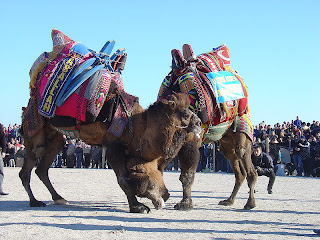 By: David Hicks
If bizarre sports had an award this one would win by a gigantic margin. Brother to the Rooster Fights, this sport is less violent and was actually started by Mother Nature. The name is camel fighting, which originated in Turkey. The object of this game is to train your camel to be the best wrestler and have it pin its opponent.
Camel wrestling tournaments start with a great ceremony that relates much to a 4th of July festival in the U.S. The camels are led down the streets with banners laying on them or flown in the air. Music is played as they march down the street. The night before camel coaches and wrestling lovers get together and have communion to meet one each other and show respect.
On the day of the tournament, the arena is filled with hundreds of spectators. The two camels are announced and the wrestling begins. The camels are tied together before a female camel is brought out to increase the aggression of the two athletic animals. The matches only last about 15 minuets long and is very intense, a lot of time the animals flee into the crowd. When one of them cries, gets pinned or sat on, flees the arena, or the trainer throws in the rope (which is the equivalent of throwing in the towel in boxing) the match is over.
The winner is presented a rug and is escorted out of the arena with cheers, while the other is left humiliated. The rug is magnificent giving the camel points with the beauty contest that usually happens later that day. This sport is one that Turkey’s culture believes is filled with discipline and has a lot of tradition. As the day ends, wrestling fans and winning trainers cheer and have fun as they remember and enjoy this great day of camel wrestling.
Posted by David "The Champ" Hicks at 11:42 AM

Email ThisBlogThis!Share to TwitterShare to FacebookShare to Pinterest
Labels: Sports