There are a slew of movies assaulting us in the forms of television commercials, internet ads, and from the mouths of our friends; but I’m here to dissect each new blockbuster by presenting its basic premise and discussing whether it’s any good or not. I’ll stop wasting time now and invite you to read along. 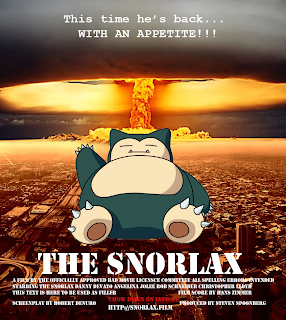 First up is “The Snorlax”, an animated adaptation that follows the whimsical tale of a gigantic sleepy creature in a forest. It’s all fine and dandy for the mystical Snorlax (whose daily regimen consists of sleeping 23 hours a day, with 1 hour being allocated to eating tons of foliage), but nearby logging companies need easy access into the forest, and Snorlax just happens to be sleeping on the only road to the forest. They try all sorts of methods to wake up the gigantic beast to no avail, but fortune smiles when a traveling musician wanders by and plays a tune on his flute. The completely random occurrence wakes up the Snorlax and sends him chomping his way down the route. The logging company cheers, thanks the old man, and then heads down the road to find the creature asleep in the road again. The movie is filled with suspense, heart-felt acting, emotional drama, and a gripping love story between a man and his flute.

Next is “The Grunger Games”, based on a fictional tale found scribbled on a napkin in the trash can of an FYE. “The Grunger Games” portrays the deep struggle that a group of wannabe grungers face as they try to survive in their dystopian Washington society, which is filled with rampant Steven Seagal impersonators. The screenplay was written by Billy Ray Cyrus, which should immediately tip you off on the masterful camerawork in the film. The background score features Taylor Swift, so it’s a safe bet that an ex-boyfriend’s house will be burned down within the movie. While the film is okay I suppose, I fail to see what all of the fuss is about. However, the director has already planned five sequels based on napkins found in other record shops, so perhaps my burning appetite for quality will be filled with later installments.

Let us grunge on to the third film, “Don’t Barter on Stars”, directed by Andrew Stanton of “Finding Nemo” and “WALL-E” fame. The film is based on a series of classic science fiction novels that explore the deeper meaning behind economics on other galactic matter. Burning hot deals can take on new meaning while trying to sell your wares on a star, but main character John Bon comes to find his wallet in a black hole as his profits are mysteriously drained. I’m going to spoil it right now; there are about 11 books and this movie covers the first installment, so no clear answers are provided. The beginning and end of this movie are exciting and thrilling, but the in-between doesn’t quite satisfy. Most critics will tear apart “Don’t Barter on Stars” for this, but I see it as a metaphor for our universe itself: it was interesting at the start, and it’ll be interesting at the end, but in the meantime it all just causes a lot of complaining.

The last movie attracting a lot of buzz is a modern sequel to a classic film, called “Dr. Strangelove or: How I Learned to Continue to Not Worry and Keep Loving the Bomb”. While the first film released shortly after the Cuban Missile Crisis and at the point in the Cold War where the Hydrogen Bomb was on citizen’s minds, “D.S.H.I.L.T.C.T.N.W.A.K.L.T.B.” is able to hit viewers in a time where a nuclear missile could be launched from almost any landmass in the world. “D.S.H.I.L.T.C.T.N.W.A.K.L.T.B.” is another dark, satirical look at what could happen if a nuclear missile were to be launched in today’s world, directed by someone Stanley Kubrick (the original director) walked by on the street. This new film masterfully weaves humor and fear into a cohesive, chilling, and hilarious display of film-making.
Posted by MykonosFan at 8:09 AM

Email ThisBlogThis!Share to TwitterShare to FacebookShare to Pinterest
Labels: Entertainment