On March 23, Theater teacher Christina Bright-Iman took 3 students (seniors Alex Blankenship, Christopher Kimble, and Will Mullins) to Parkersburg High School to attend an acting workshop lead by actor Paul Dooley, a graduate of PHS. Dooley, with a career spanning nearly five decades, imparted a reflection of his career, advice to aspiring actors and actresses, and even performed a small routine from his stand-up career. 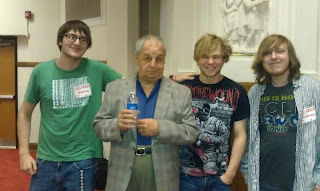 RHS students gather for a photo with Paul Dooley, as he states "Celebrate water!" (From left to right): Will Mullins, Paul Dooley, Alex Blankenship, Christopher Kimble
The event took place in two parts; the first of which featured Dooley on stage being interviewed in the auditorium by a student before the school. Anyone in the audience unfamiliar with the actor surely left impressed, as Dooley proved himself to be an enlightening, humorous, and entertaining individual. After about an hour and a half, the event took a break for lunch, and then resumed exclusively for PHS Theater students (and for those visiting from other schools). Here Dooley was treated to a couple of PHS students in the Drama Club performing a one-act play of his entitled "Post It Notes on a Marriage", which he said was "terrific". He also took a chance to talk a little more in-depth about specific roles he's had, what he thinks about acting today as opposed to when he started, treating attendees to a vaudeville act with his son, and even shared a few personal stories about growing up in the area. The event ended when the class period ended, and Dooley was met with applause in his return to the Parkersburg area.
Posted by MykonosFan at 8:13 AM

Email ThisBlogThis!Share to TwitterShare to FacebookShare to Pinterest
Labels: News