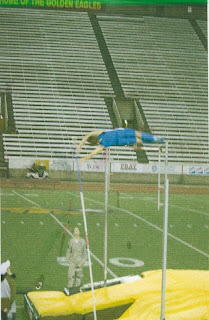 The boys and girls track teams have been doing very well this season. Under new coach, Mike Bright the team has had a much better season this year than several of the previous years.


With six meets down, the boys have taken four first place spots, while the girls have taken two. The season is in full swing as the school year is slowly dwindling. The boys and girls practice hard every single day, and it is evident in their recent competitions.


Bright was previously a track coach for Roane County, Braxton, and Greenbrier East. In his six years of coaching high school track he has had 80 percent of his boys and girls successfully make their way to states, with one athlete placing first in two events.


Coach Bright has high expectations of this year’s team, expecting nine of his athletes to compete in states. Freshman, Zane Griffith, recently cleared 12 feet in pole volt in recent competition and is hoping to also attend states.


“I got my goal of 12 feet, beating it by six inches actually. So I feel very good about it,” Griffith said.


Only being in his first year of high school, he has high hopes of going very far, potentially even attending college one day on a track scholarship.


States will take place at Laidley Field in Charleston on May blank and blank. Go out to the field to support your Viking runners.
Posted by Dannigirrrlll at 2:59 PM