As part of a state and local government project, students were split into teams to organize and run a mock campaign for West Virginia governor. The politicians researched current topics, chose stances, and held a mock debate on October 30. They also created commercials, advertisements, and wrote speeches that were posted on the school website. The debate was moderated by principal Will Hosaflook and covered topics such as the legalization of marijuana, education, and West Virginia economy and industries. Seniors voted the same day as the debate, and republican Joel McDonald was chosen and sworn in as our governor. 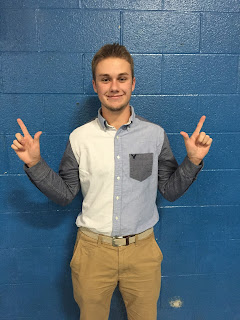 Posted by Krissa Scarberry at 12:53 PM

Email ThisBlogThis!Share to TwitterShare to FacebookShare to Pinterest
Labels: News